The endosymbiotic theory describes and explains the process of the creation of the cells of all animal and vegetable life. It has the cell biology of the 20th century revolutionized like no other concept. It founds hardly a feature of public perception as a biological theory. This may be partly due to its complexity, and partly to the fact that its difficult name is difficult to anchor in the general public's mind. Still, it is a fascinating part of the modern theory of evolution, so it should be worth taking a closer look at. In particular, the exciting facts that underpin them provide additional, weighty one's evidence in favor of cellular evolution and, last but not least, also prepare the path to a deeper understanding of our own prehistory.

So it would pay at least as much attention to this theory as the other partial theories of the theory of evolution, especially since it has to defend itself to a no lesser extent from religiously motivated (creationist) attacks. Nevertheless, there are hardly any articles in which the theory is explained in detail and is defended argumentatively. The present work aims to contribute to this affords. But before we can go into the main points of criticism of the endosymbiotic theory, we must first understand the fundamentals of this theory and briefly compile the supporting evidence.

We probably need to first take a look at the structure of bacterial Cells and the cell's multicellular living beings and discuss what the differences are, this can be measured in terms of the cellular structure. 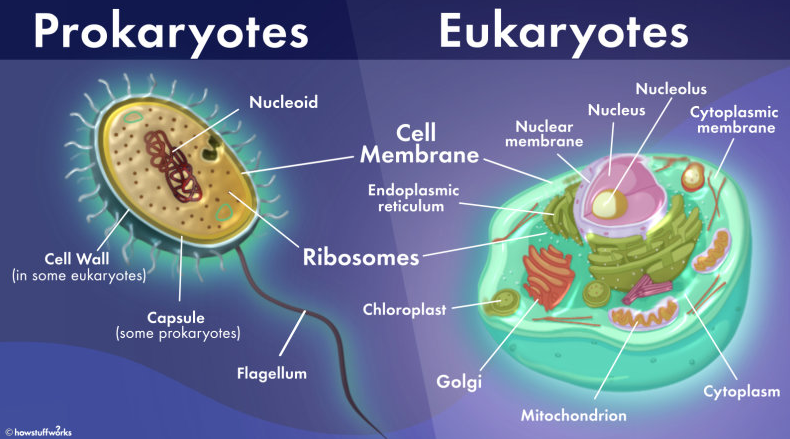 Both are characterized by the Lack of a differentiated internal structure. In particular, prokaryotic cells do not contain an internal one Membrane system and not a cell nucleus. Your DNA is a “naked” molecule in the Plasma of the cell, the eukaryotes include the rest of the living beings: protists1 (eukaryotic one to few cells), fungi, plants, and animals (see Fig. 2). 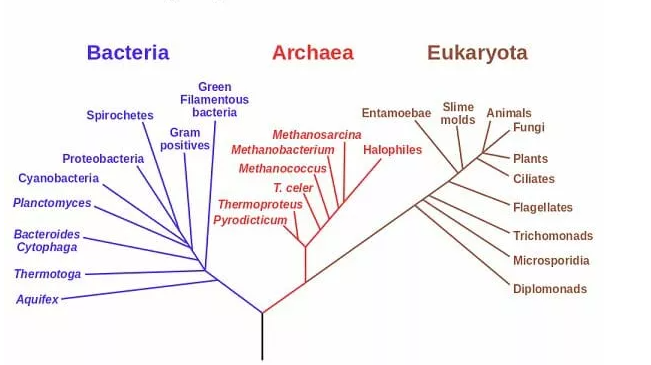 The group of Prokaryotes includes archaea and bacteria. This result in the three domains of all life: archaea, bacteria, and eukaryotes. The main difference between the eukaryotes and the prokaryotes is that they have a real cell nucleus as well as membrane-covered organelles, some of which contain their own genetic makeup (genes) (Fig. 1). An example of this are the mitochondria, the fatty acids and sugars with the consumption of oxygen (“cell respiration”) convert into the energy carrier ATP, which is why they are also known as “power plants of the cell.” Plant and algae cells also contain plastids, e.g., in the form of chloroplasts, in which the Photosynthesis, i.e. the build-up of glucose from carbon dioxide (CO2) and water in sunlight, takes place, starch is stored, etc. These two organelles (Fig. 3) are completely absent in the prokaryotes.

If you study the structure of mitochondria and plastids closely, you will notice that they are usually demarcated from the cytoplasm by two covering membranes, the outer membrane being typically eucytic, while the inner one is determined Has protocytic (bacterial) features. The plastids of the Euglenoids and Dinoflagellates, on the other hand, have three shell membranes; those of brown algae and diatoms even have four-fold membranes. In addition to this peculiarity, there is the finding that plastids and mitochondria have their own circular DNA and that their mode of DNA amplification and protein production characteristics of has bacteria, their mode of division is also very similar to that of bacteria. F. Schmitz was able to prove over 100 years ago that the plastids of Algae always emerge from their own kind by division, and not how to get it of cell components would be expected to be newly formed in the cycle of cell division will. It was also found in the 19th century that the blue-green colored plastids of some types of algae to cyanobacteria (incorrectly blue-green algae) are strikingly similar (Fig. 5). In 1905, C. MERESCHKOWSKY had one of A. SCHIMPER's (1883) uttered conjecture condensed into a hypothesis with enormous implications, the all these peculiarities explained in a plausible and informal manner. It should prove to be revolutionary in understanding the origin of multicellular life: it is the statement that mitochondria and plastids go back to formerly free-living prokaryotes, those of alien, pre-eukaryotic host cells ingested without mitochondria and plastids, but not digested are, but first of all a stable form of partnership between both parties Benefit (endosymbiosis) received with the host cells. The prokaryotes shared spread in the host cell so that their offspring again appeared in the daughter individuals. The symbionts went through a co-evolution the gradually led to mutual adjustment and eventually to dependence.

The symbionts lost their autonomy and were transformed into organelles. In short: the endosymbiosis system points an important step in the major evolutionary transition to today's eukaryotes; its serial process is described and explained by the endosymbiotic Theory (GRAY et al. 1999). The three most important steps of serial endosymbiosis are shown in Fig. 4 shown.

Initially, the pre-eucyte formed an inner membrane system (endomembrane system), which also includes the covering of the cell nucleus and the endoplasmic reticulum. The original eukaryote with a nucleus, the precursor cell of all eukaryotes, was created. This cell was able to absorb substances and also other cells from the environment, so to speak “eat” them, this ability to phagocytosis is a characteristic ability of everyone Eucytes. Next, such a primordial eukaryote ingested an eubacterium. This step is supported by a lot of data: based on genome analyzes, today is generally accepted that the mitochondria were formed from a group of photosynthetically autotrophic purple bacteria (α-proteobacteria), with which a prokaryotic precursor cell entered into an endosymbiosis. Over time, the symbiote lost the ability to synthesize most of its own cell components, whereby an intracellular gene transfer took place. Parts of the symbiont DNA were integrated into the nuclear genome of the host cell — today's mitochondrion, which is dependent on the mother cell, was created.

The group of α-proteobacteria includes intracellular symbionts such as nitrogen-fixing bacteria (rhizobia) and also intracellular parasites like rickettsiae and agrobacteria. As a model for mitochondrial (and plastid), free host cells are considered a number of protists such as the flagellate Giardia lamblia, which parasitizes in the intestines. Without the appropriate organelles, they have neither via cell respiration, and they can still photosynthesize. However, they have probably lost their mitochondria secondarily because they have genes or proteins typical of mitochondria and mitosomes, which have structural similarities to mitochondria and are therefore interpreted as severely regressed mitochondria. As model organisms for a mitochondria-free primordial eukaryote, these primeval organisms are still good.

The third step in serial endosymbiosis is even better documented: the formation of plastids (chloroplasts) by taking up a photosynthetically active cyanobacterium into a eukaryote that possessed mitochondria (Fig.5).

For example, in some algae there are so-called cyanelles, their Ancestors, the cyanobacteria, are even more similar than the chloroplasts of the Green plants. Cyanelles contain about 10% of the DNA of the genome of Cyanobacteria (Fig. 5), which roughly corresponds to the genome size of plastids corresponds. The cyanelle certain freshwater algae (glaucocystophytes ) are even from one cell wall surrounding the is constructed like that of cyanobacteria, and use for the Photosynthesis of certain Pigments (the phycobilins), which largely correspond to those of cyanobacteria.

The serial endosymbiosis steps from the prokaryote to the modern eucyte are called primary endosymbiosis, which indicates that earth history has carried out further endosymbiosis events. A receipt for this is, e.g., the complex plastids of euglenes, brown algae, and diatoms, which have three and 4-fold membranes. They arise when a eukaryote that already possesses mitochondria and plastids, again from a eukaryotic one, the Host cell is absorbed, i.e., when one eukaryote harbors another eukaryote (secondary endosymbiosis). At this stage, the nucleus of the incorporated eukaryote was gradually reduced and often completely dissolved, in that its genome was partly lost and partly transferred into the nucleus of the host cell (Fig. 6).