In the previous section, we discussed the behavior of the demand curve and how consumers make decisions about what they should buy or leave. We looked at how different factors, including financial, constrains can affect consumer decisions. In the article, we shall be focusing on the underlying behaviors of specific producers using the supply curve. The term "firm" will be used to represent a company involved in the production process.

The year 1908 saw a great revolution in the automobile industry. The first of these machines can be traced from as early as the 15th century when Leonardo da Vinci built designs and models for transport auto. In 1885, the first gas-powered vehicle was introduced to the market by a German inventor, Karl Benz, followed by the opening of the primary American vehicle producer in 1893. Throughout this period and the previous times, the industry was a luxury only for the higher society. It was simply a revolution on cost and therefore, could not make much change in the industry until 1908.

The American manufacturer, Henry Ford, build a mechanic that slowly decreased the production car, the assembly line. Workers were no longer involved in the production of each part of a car; rather, there were specialized workers to handle specific parts. Here, we see a good illustration of the marginal product of labor (MPL). And this margin increases and the producer increases the workforce. New works create a more efficient environment in the assembly line.

One of the most famous models, Model T, popularly known as "Tin Lizzie," is a folkloric symbol for the American people. This is because it created the turning point where a large number of Americans could afford cars. And by 1927, there were more than 15 million Model-Ts on the market.

We can describe this as an ingenious innovation in productions. It tells us that the economics of a firm bear a vital significance on the whole market – hence we can understand how costs affect supply.

In a perfectly competitive market:

- Producers make more products if MB (or price) is greater than the MC.

- They will make less where MB (price) is less than MC.

- They will maximize profits if MB=MC.

- The supply curve represents the aggregate MC of all firms.

The supply or marginal cost curve is represented as a linear and upward sloping. So, how do firms respond to the shocks from demand and supply? We are going to answer this question.

Every firm faces various types of costs, different from other firms. For instance, the costs involved in producing automobiles will be very different from those of fast-food meals. However, we can establish that, at some point, the cost structure of all firms is the same. We can break down in common types.

Let's begin by considering the cost of a firm in the short run. They originate from different input points involved in the production process. A quick run process means there is at least a single factor that cannot be altered – the fixed cost. This is a cost we cannot avoid in the short term unless the firm quits production altogether. The total costs of production is an important consideration for a firm, a starting point in dividing overall costs into two parts; the fixed costs (unchangeable) and variable costs (changeable).

What are the fixed costs?

Let us look at Ford's production line. We can say the firms' fixed costs are the expenses that never changes no matter the production level. Where he produces too little, enough, or too much, the cost remains the same.

Now, the producer has to open a factory. In this case, Ford needs someone to sell or rent him the space. Luckily, he finds Tom, who is willing to lease a place with a $20,000 one year lease agreement. Once, Ford, has signed the contract, it means he will spend the money, regardless of whether he produces anything or not. This becomes sunk cost because he will never get back the money.

Fixed costs come in many forms. Apart from the sunken cost, there is the costs of equipment and machinery, research and development, and even marketing costs. These costs can vary, depending on how big the firm is.

As stated above, variable costs are those costs that can be changed. They are incurred during the production process. The more a company produces, the more the variable cost. After signing the lease contract and buying machinery, Ford must purchase raw items and hire worker to help in the production of these cars. He will have to hire more workers and buy lots of materials to get the best.

In an industry that is more labor-intensive, like a barbershop, labor is one of the most vital variable costs. This is because it goes beyond just the hourly wages.

Let's think of barbershop X. Their variable costs include hiring barber. And lets say the shop has to pay $80 per worker per day, where hiring more barbers will increase the quantity of haircuts, depending on how many each barber can produce in a day.

Note also, that there is the effect of diminishing marginal returns in productions. If there was only one barber working at X, the place would be very busy. He will be responsible for greeting customers, shaving them and cleaning the place. But with more barbers, the advantage of each worker reduces. With only two barber, there is more specialization of labor, leading to a better production. Now, adding eight barbers just to greet people at the door will not have much impact. This is a pattern of diminishing marginal returns. The cost of production begins to rapidly with increased output, which may even result to negative returns. Adding even more barbers will create a rift, making them bump into each other as they move.

Where the cost of hiring a barber is $80/day, we can represent the MPL as a variable cost. Assuming the barber can do 15 haircuts per day, we can say the marginal cost per haircut is $ 5.33/haircut (wage/MPL).

When you plot this on a graph with different numbers of barbers, the x-axis changes from "barbers" to "haircuts." We look at productivity by co quantity or workers, and marginal cost by each output level. You will notice that when MPL increases, minimal costs fall. 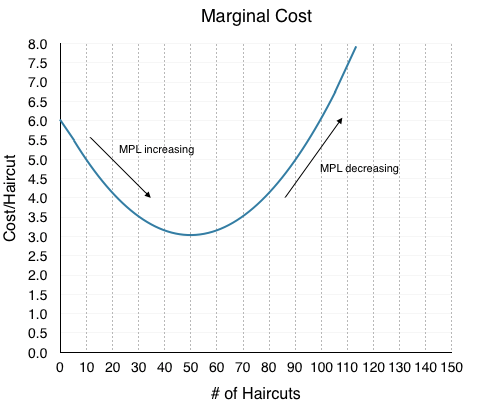 With the information we have on marginal cost, it can be easy to know whether more input will be profitable. It is important to know the profit from a single haircut. At times, producers can ignore the variation and calculate the average variable cost by taking the total costs for each worker to a point and dividing by the total number of haircuts. 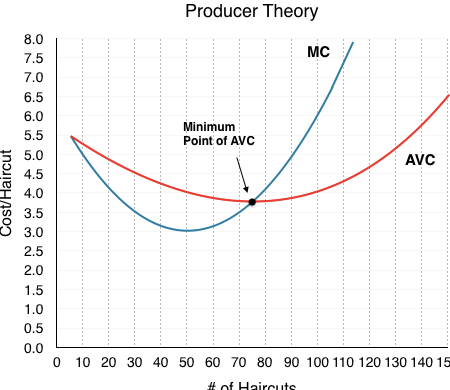 The intersection occurs at the cost of $4 is build into an economic meaning of MC and AVC.

The average product of labor

We can use the same analysis as above for the Average Product of Labor (APL), which is also an AVC curve derivative. On a curve, you will notice the APL happens as the minimum point of AVC. This is because costs/haircuts are lowest when, on average, barbers are most productive.

If barbershop X has fixed costs amounts to $150 per day. The average total cost is calculated as an average of the total variable cost and the total fixed costs. We can use the equation (total VC + FC)/Q. This equation can be expanded into VC/Q+FC/Q, which becomes AVC + AFC. 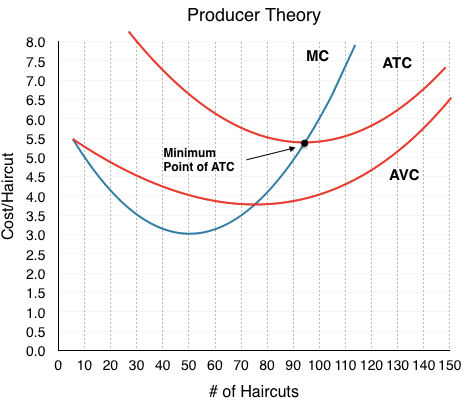 Notice that the AFC is always falling as Q increases.

Now to understand the Theory

In the section above, we have built the producer theory and explained all the necessary terms.

Economists use producer theory in non-competitive markets. But in this case, we can study with price-taking firms.

If, for instance, barbershop X is operating in a city in competition with other barbershops, they will not have any control over the price. The market dictates where they produce. As you may already know, economic agents apply marginal analysis when considering behavior changers. We for that Q increase if MD is greater than MC. It will stop where MB is equal to MC.

It is only fixed costs that differentiate PS and profit. And even though profits and producer surplus are not the same, maximum PS leads to maximum profits too. 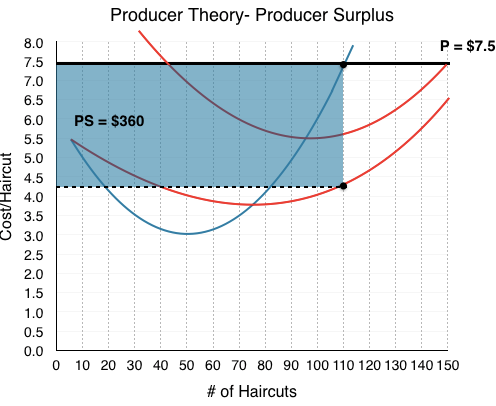 MC = P because it is the profit maximization quantity.

From the figures above, the fixed cost value is the difference between the profits and the producer surplus: $360 - $120 = 150.

In case of losses

When P is greater, the ATC, barbershop X, generated profits of $210 per day. These figures may not be sustainable in the long run. In the short run, firms can produce even when PS is negative.

The firm is making losses, and you should be thinking perhaps it will shut down, considering the still have to pay $150 as fixed costs. Hence, it is better for the company to take a $45 loss over $150.

As long as the company has enough to pay for variable and fixed costs, it can still operate. This means PS is greater than 0. However, thoughtful companies will not continue taking losses in the long run. At the shut-down point, the company is only able to cover their variable costs.

But there can also be a break-even point. The company is not making any profits or losses.

Looking at the Producer Theory in the Long run

Barbershop X still has to make the long-run decision. Some of the actions the company may have to look into include:

In this case, it is vital to remember barbershop X is a price-taker, operating in a competitive market. Their price is equal to the equilibrium price in the aggregate market.

If each firm is able to make a profit of $210 in profit after economic expenses, it means this is an attractive industry. But, it is not sustainable in the long-term since other businesses well see an opportunity and join the market. When supply increase, chances are demand will decrease.

Let's say the number of businesses has grown from 50 to 63 firms, barbershop X's profits may go down to about $52.5 only. If in case the equilibrium price has fallen, there are still positive profits, and the supply will increase constantly.

The most crucial takeaway is, whereas companies make profits (positive or negative) in the short-run, they will always break-even in the long-run.

Now that you understand how a firm behaves in a market and how the market responds to negative and positive profits, you can apply the knowledge using comparative statistics. Also

, the basic tools of the producer theory you have learned should help you better understand microeconomics.