During the Great Recession in the period of 2008/2009, many families around the world faced very difficult times. In many countries, people lost their jobs. Even in the developed nation where unemployment compensation offered a shield, families still struggled with many things. With decrease income, for instance, many had to make tough spending decisions and adjust appropriately. It was a matter of identifying, no-essential, discretionary spending, and put them aside.

Despite such a tough time, there was an 18% uptick category on individuals in the USA who experienced a global increase in spending. Note that this and many other similar times, consumers started eating more homemade meals, hence spending more at the grocery stores. The Bureau of Labor Statistics carried put a Consumer Expenditure Survey (it tracks US food consumption), whose results show a decline in real food spending by five percent compared to 2006. This means it was the groceries that enjoyed high expenditure. And it leaves us to wonder what kind of product people would demand the most during such times.

And this issue introduces us to the analysis of consumer concept. Many consumers don’t have the luxury of closing their ears and picking whatever their hands lands. They have to go through a thorough decision-making process. It is their decisions that affect the global economy in general.

How do households make decisions? After saving for a long time, a family may be faced with the option of buying a new car the need or going on a fancy vacation. To answer this question, economists consider what a consumer can afford. The primary determinant of an economy, especially consumer choices, is scarcity. This is s term that defines a situation where demand is above supply. No one can afford to get everything they desire to have. Also, this is something to do to supply and demand aspects of economic growth.

To know what consumers can afford, one must first chart the consumer’s financial constraints. Of course, we can do everything if we have enough money. Hence, budget constraint becomes a significant factor in consumer expenditure. In the chart, the quantity of d single good is drawn on the x-axis, and the quantify of the other on the y-axis. In this case, we apply a combination of two products affordable to the consumer in determining budget constraints.

Let take an example of one Mr. Chris, who loves to buy T-shirts and movies. We can plot the T-shirts in the horizontal axis and the movies on the vertical axis. Assuming Chris has limited resources, he could consume all the T-shirts and movies he wanted. But that is never easy because of budget constraints. This means the consumer must set a specific amount they wish to spend and work within its boundaries. In this case, let say Chris wants to pay $56. One t-shirt is $14, and one movie goes for $ 7.

It is quite easy to make this graph. On the budget line, each point has to exhaust the budget Chris has set. You can simply find these pints and plot the intercepts whereby each intercept is a point where Chris spends everything. If he spends it all on movies, he will get 8 of them. The y-intercept is, therefore (0,8), meaning he has bought 0 t-shirts and eight movies.

When you connect these two important points, you will get a budget line that shows every combination Chris can get comfortable. 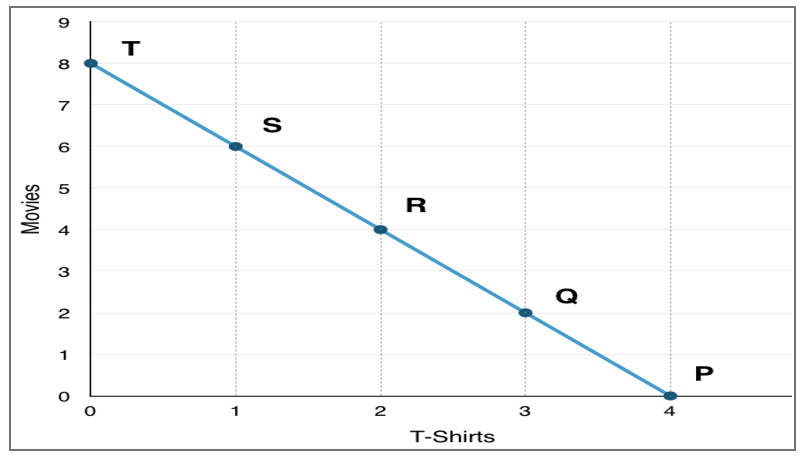 Consider point Q on the figure above. He will spend:

Looking at the budget line in the figure above, we know how Chris must adjust his needs to fit what he has. Understand that any point within the budget is feasible, and Christ can spend less than $56. But we say it is not optimal since he can choose to buy fewer goods. Since there are only two options, this model does not enable him to save, and he will have essentially wasted his money if he does not spend it. Any area beyond the line is not feasible; he cannot spend more if that is all he has.

It is crucial to understand the slope in economics. In this case, one can easily connect the X and the Y intercepts to make the Y-axis. But then, we have to put into account that slope is the rate of changes, in this case, QY/QX. From the graph, the quantity is halved when the price is doubled. We can see that the price on the y-axis represents a quantity.

What if the income changes?

The budget and price are not constant. At one point, they will change, and in this case, the budget line shifts. Let’s say now Chris wants to spend $42 instead of $56. In this case, he will not buy the same number of goods as before.

In this case, his budget line will move inwards.

What if Price Changes?

Let’s say the price of one movie increases to $14, and t-shirts retain the same price. He will buy only either 4 T-shirts or 4 movies.

At some point, the price and income can change simultaneously. In this case, even the pivot on the slop will change.

Whatever the case, it is clear that any change in the price and income will affect consumption. It can either lead to more or fewer consumption opportunities. We will explore more of these in the next section.

Economists state that rational consumers will spend all their income, and this means they will have to product somewhere along the budget line. How much they produce depends on their preferences.

Let’s say Chris hates movies; this means he will spend on his income on t-shirts. And if he hates t-shirts, then he will only buy movies. But in many cases, consumers want to mix.

The utility is a concept that describes where people consume based on their strengths and preferences. This is a term that was introduced by Daniel Bernoulli, and it means the full satisfaction a consumer receives after consuming a product. In other words, utility measures how happy people are with a good or service.

Preferences can also be graphed, just like we saw with consumer choices above. The budget line shows how the consumer spends on specific products. There results in an indifference curve, which maps consumption choices viewed as equal buy the consumer.

In the figure below, we see the possible consumption points. From our previous knowledge, you can tell what Chris’s consumption choices are and what he will pick at what point. 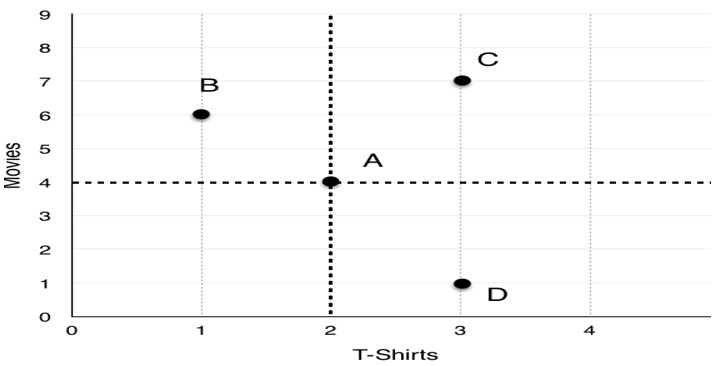 In case of perfect substitutes

As stated above, many consumers like mixing up things a bit. Let’s assume Chris views T-shirts and movies with the same preference. Hence, they are nearly perfect substitutes. In this case, he would be indifferent between these choices. But if we assume he prefers t-shirts twice as much as movies, he will be more satisfied with more t-shirts.

Chris will go for what makes him happier. He will use choose more of his preference towards his favorite product. And to maximize his utility, he will go for the highest indifference curve affordable.

In the indifference curve, the slope is referred to as the Marginal Rate of Substitution (MRS). This is the quantity of a good the consumer is willing to sacrifice for a unit of a different product without altering utility. For instance, the maximum number of movies Chris will have to forego in order to get one T-shirt is two. He cannot give up more because this will lead to a lower indifference curve. You will notice negative slopes in indifference curves because of the downward sloping.

Well, now that we know the indifference curves, it is easier to understand the consumer concept. We can see that MRS is simply the marginal benefit. It represents the highest amount of y the consumer wills to give up in order to gain on x. It also measures how happy is happy with x in terms of y.

What this means is:

Where MRS is greater than Px/Py, the consumer buys x more than y.

Where MRS is less than Px/Py, the consumer goes for less x and more y.

Where MRS is equal to Px/Py, the person will not alter their consumption.

Remember, MRS is the slope of the indifference curve, whereas Px/Py is on the budget line. 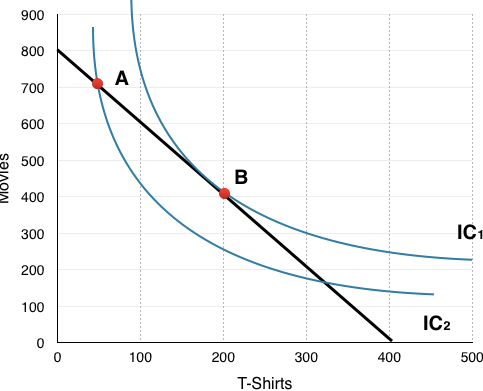 Therefore, if the slow is steeper in the indifference than it is on the budget line, the person will take in more x than y.

In the figure above, you can see the budge line in relation to a potential indifference curve. MRS is greater at point A than Px/Py. This means Chris goes for more x in utility.

The utility-maximizing point is at point B, where MRS is equal to Px/Py. Given the constraints, the consumer is likely not to change his behavior. And when all points appear on the budget line, the consumer can increase their utility without changing their expenditures.

From the information, we can conclude that a person will consume at the point where the indifference curves and the budget lines have equal slopes.

We have seen the law of demand that states an increase in price reduces the quantity of the goods demanded. Now, we can easily understand how consumption choices react to a change in price by considering the indifference curve and the budget line.

In a graph, let’s say we have 100 consumers like Chris. Let’s assume the price is increased from $14 to $28; this means he will only buy 2 t-shirts ($56/28). Now, in a market with 100 buyers, a total of 200 t-shorts will be bought. An increase in prices will mean the budget line pivots inwards and alters the price ratio. The movie's price has not been affected; hence he can still buy 8 movies.

Using our graph, the consumption changes from 200-T-shirts and 400 movies to about 70 T-shirts and 500 movies from point A to point B. We can use two approaches to determine why this case, determine whether the goods are complements or substitutes and whether they are normal or inferior.

1.   Using the substitution effect (SE) that isolates the effect of the change concerning price using a constant,

When the prices of products change, it causes budget constraint to shift. In this case, there is a formation of a new indifference curve. The quantity of goods consumed consequently falls. This information can be represented on a demand curve, which is determined by the underlying choices made to reap maximum benefits from the utility subject. It is not easy to measure utility

, but economists can use price and quantity to determine their effects on consumption.