Modern Art that the Past Would Have Scorned

We’ve looked at examples of art that have been influenced by different movements of historical art, but there are also some modern creations that would probably not have seen much light if they were presented in a past era.

These are the pieces of art that make people stop and stare, wondering how something so simple or everyday could have ended up in an exhibition. Have you ever looked at a simple canvas that sold for an unbelievable price and thought to yourself, “Hey, I could have painted that too”? These are the pieces of art that sometimes make people question if they are truly “art”.

What makes something a work of art, anyway? Perhaps it is the creator’s name that holds the weight, or perhaps it is the hefty price tag placed on these items. Whatever reasons caused people to praise these creations, we can only wonder what our predecessors would have to say about these works of art.

In 1961, the Italian artist Piero Manzoni produced 90 tins of “Artist’s Shit” or “Merda d’Artista”. The tins were numbered 1 to 90, each weighing 30 grams and measuring 4.8 by 6.5cm. The label stated in Italian, English, French and German:

The words on the label themselves have spurred some discussion, with people wondering how the contents of the tin could be preserved before it was even produced and tinned.

This is by far the most notorious of Manzoni’s works, but at the time he produced this work, Manzoni was exploring the relationship between human production and art production. He had earlier created an artwork called “Artist’s Breath”, which consisted of balloons filled with his breath.

The tins could also be a response to what Manzoni’s father is said to have told him once: “Your work is shit.” Taking this at face value, Manzoni produced his own works of “Artist’s Shit” – put into cans, an apt gesture considering his father owned a canning factory.

Not all of the tins were sold during Manzoni’s lifetime, but he did sell 1 tin to Alberto Lùcia for 30 grams of 18-carat gold in August 1962. The tins were originally valued according to their weight in gold, so in 1961, a tin would have cost around $37.00 when gold sold for $35.20 an ounce.

While it certainly makes one wonder how Manzoni could market excrement at such a high value, perhaps the greatest mystery is what is really inside these tins. The tins cannot be x-rayed or scanned because they are made of steel, and opening a tin would cause it to lose its value. As such, the real contents of “Artist’s Shit” remain a mystery.

This has been disputed, with many questioning what these cans actually contain. Agostino Bonalumi, one of Manzoni’s collaborators, claimed that these tins did not really contain feces but plaster. However, Manzoni’s girlfriend Nanda Vigo, who helped him produce the tins, argued that they were really feces.

The artist Bernard Bazile did venture to open one of these tins, exhibiting it as a work of his own, called “Opened can of Piero Manzoni” or Boite ouverte de Piero Manzoni. The tin was only opened slightly, revealing an unidentifiable wrapped object. There are also rumors over the Internet that some tins have leaked or exploded, and that x-rays have revealed a can inside a can.

To this day, nobody still knows what is truly inside each of these cans of Artist’s Shit – which is perhaps a major reason why the work still retains its high monetary value. After all, the mystery may well be the greatest irony of these tins. 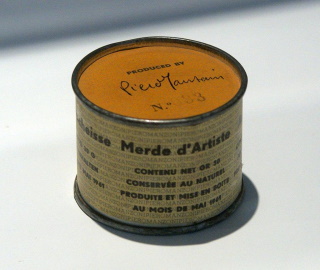 British artist Tracey Emin created this work in 1998, titling it “My Bed”. It was first exhibited at the Tate Gallery in 1999 as a shortlisted work for the Turner Prize. Although it did not win the prize, it received much media attention, particularly due to the fact that the bedsheets were stained with bodily secretions and there were certain objects on it such as used condoms, a pair of knickers with menstrual period stains, and other everyday objects including a pair of slippers.

Emin inadvertently created My Bed during a depressive period in her life brought on by relationship difficulties, during which she had remained in this bed for four days, eating and drinking nothing but alcohol. The artist claimed she presented the bed in the exact same state it had been in after the four days she stayed on it.

The work received some criticism from people calling it a farce and claiming that anyone could produce an unmade bed. Emin defended her work by replying, "Well, they didn't, did they? No one had ever done that before."

When My Bed was installed at the Turner Prize exhibition in 1999, two performance artists, Yuan Chai and Jian Jun Xi, jumped into it to further “improve” the work as they thought it had not gone far enough. They called their performance Two Naked Men Jump into Tracey's Bed, and enacted a pillow fight on the bed for around fifteen minutes, to the applause of the crowd around. 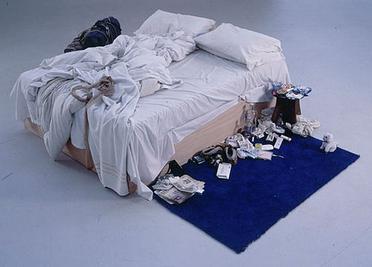 While these pieces of art are definitely novel ideas, they are also controversial as some people do not acknowledge them as art. Critics say that anyone could have created these works and they should not have sold for as high a price as they did. However, others argue that art is subjective and the very fact that these artists came up with the idea before anyone else qualifies their creations as art.

Do you think the value of a piece of art is found in the idea behind it or in its physical representation? In Artist’s Shit and My Bed, what aspects of the works cause them to be considered valuable?

Why do you think such artworks were created only in the recent century? How do you think people would have responded if these artworks had been created and exhibited in a different time period

, such as the Classical era?